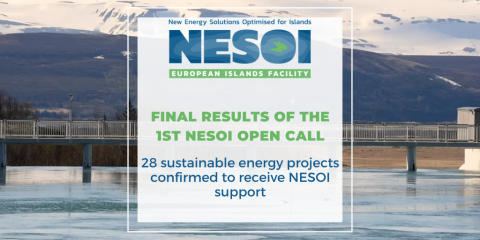 The EU Islands Facility NESOI, with the objective of facilitating the energy transition in islands, has confirmed support for 28 innovative clean energy projects which, combined, are expected to avoid around 300 kilotonnes  of CO2 per year and generate close to 1 billion euros in investments.

The EU Island Facility NESOI is pleased to announce the results of its initial efforts to engage European Island communities in its energy innovation programme. Through its first open call launched in October 2020, the facility received 117 applications from 14 countries involving over 100 islands. Out of the 117 submitted project proposals, 28 were finally selected to receive support from the facility: a combined total of 1.6 million euro in the form of technical and legal assistance, and 1.6 million euros of financial support to carry out complementary studies and action plans. Along with the backing from the facility, the selected projects are expected to generate more than 1 billion euro of investments from a wide range of stakeholders.

The selection, geographically spread across 40 EU islands in 10 countries, includes two projects from the Baltic region, five from the Atlantic region, seven from the West Mediterranean region and fourteen from the East Mediterranean region. The supported projects have also been divided into three broadly defined “maturity levels”. Seven of the selected projects are at “entry-level”, whereby no previous significant planning has been carried out by the beneficiaries. Fourteen of the initiatives are at a “conceptual design” stage, meaning that the beneficiaries have identified projects of interest to the island, but no substantial groundwork has been carried out to ensure their feasibility yet. Finally, seven projects are at “deployment level”, meaning that the beneficiaries have verified the feasibility of their projects and intend to implement them.

Focusing on different energy technologies, the effects of the selected projects on their local energy systems will vary. Almost all projects will involve the production of energy from renewable energy sources, mainly photovoltaics but also from wind, pumped hydro, and tidal energy. Just over half of the selected projects are also interested in energy storage systems and energy efficiency interventions on public assets. Other areas of intervention can be seen in the graph below (Figure 1).

Figure 1 Areas of intervention of the selected projects

The selected projects will support the EU Island Facility NESOI environmental and economic objectives as well as contribute to achieving the EU’s broader clean energy targets as outlined in the EU Green Deal. The estimated primary energy savings to be obtained by these projects amount to 541.5 GWh/year, with an average of 19 GWh/year per project. On the other hand, the expected average contribution per initiative in reducing greenhouse gas emissions is by 10.5 kilotonnes of CO2 per year. Combined, the 28 selected projects are expected to avoid around 300 kilotonnes of CO2 per year.

The EU Island Facility NESOI will launch a second open call for applications in the Autumn of this year.

Islands across the EU have long been prime candidates for the implementation and uptake of renewable energy sources like wind, solar and tidal, and in engaging all relevant local stakeholders in the clean energy transition process. Their specific geographical situation naturally creates a need for a strong and cohesive community. Additionally, with tourism being an important asset and at the same time a stress factor, the preservation of the natural environment of islands as well as the establishment of a resilient economy is a key aspect of the clean energy transition.

In Europe alone, there are around 2,400 inhabited islands. To support them in driving the energy transition, the European Commission launched the EU Island Facility NESOI (New Energy Solutions Optimized for Islands) in 2019. The NESOI facility backs local entities of islands in getting the necessary technical and financial support for the effective development of their energy transition plans.

The EU Island Facility NESOI is an interdisciplinary group of experienced partners including economic and financial specialists, technical, legal and procedural experts as well as consultants on environmental and social issues that have joined forces to help island communities achieve more efficient and sustainable energy solutions, in line with the EU’s clean energy priorities, through the funding, supporting and monitoring of energy projects lead by local authorities and island energy communities.

Starting in 2019 and ending it 2023, the EU Islands Facility NESOI has been awarded by the European Commission with a Horizon2020 Programme grant of €10 million, out of which €6.2 million are meant to directly support islands in their energy transition process.

In the coming months,the team in NESOI will offer a series of short webinars involving experts in the field. This activity will be complementary to the e-learning modules that are expected to be also made available in the last months of 2022. The most mature projects will support the elaboration of the learning material by providing valuable input from their experiences to help less developped projects.

3 short study tours of 3/4 days on EU islands
Open call for participants will be around November on the NESOI platform
Topics explored by the STTs: Clean harbours and boats, Energy communities, Green Hydrogen, etc.