The EU Islands Facility NESOI in collaboration with the Clean Energy for EU islands Secretariat, have organised the “Island Gamechanger Award” in the framework of the EU Regions Week (11 – 14 October 2022) that aims at recognising the evolution of sustainable islands’ projects that can serve as an inspiration for others.

Island beneficiaries from these two programmes were encouraged to submit their application before the 15 September 2022 detailing the progress and results of the project, its impact and replicability and the level of engagement of the island’s community.

The jury, composed by a group of five individuals from DG ENER, IFRI, the University of Genoa and the Cabinet of MEP Tonino Picula, selected 10 projects on the 30 September that were eligible to receive extra funding for technical assistance activities to continue their implementation. The top three were invited to Brussels, where the ceremony was streamed in as a side event of the EU Regions week. In the same session, the Grand Jury Award, the Public Award and the top ten projects eligible to receive additional assistance were announced.

Mr Andrea Martinez, coordinator of NESOI Islands Facility, followed with a presentation introducing the main lines of the project and the activities that will take place in the next months, such as the webinar series with best practices related to energy transition in our islands and the Erasmus Short Study Trips, that will materialise in spring 2023.

Ms Marina Montero, coordinator of Clean Energy for EU Islands secretariat, closed the introduction explaining the parcourse of the secretariat in its different phases and outlining the kind of assistance given to islands. She then explained the mechanism of the “Island Gamechanger Award” and the process to vote for the Public Award, that was selected in an online poll during the session.

In the second part of the ceremony the floor was given to the top three project representatives that had come in person for this award. Mr Dimitris Katsprakis, professor at the Hellenic Mediterranean University in Heraklion (Greece) and promoter of the Minoan Energy Community, presented SAVE (Sustainable Actions for Viable Energy); Mr Ricardo Luis Guerrero Lemus, professor at Universidad La Laguna in Tenerife (Spain), presented SoFIA (Setup of the First Citizens' Energy Community in Canary islands: Adeje) AKA ADEJEVERDE; and Mr Eduard Escolà, engineer at the Waste and Energy Committee of the island of Menorca (Spain), who represented SYMBIOTIX (Socialized PV plant and energY coMmunity with puBlic-prIvate cOllaboraTion for buIlding and eXploiting).

Finally, the project: SYMBIOTIX was the winner of the Grand Jury Award, a prize that was handed by MEP Mr Tonino Picula. SAVE got the Award from the Audience.

The selected projects contribute to achieving the EU’s broader clean energy targets as outlined in the EU Green Deal. Among the ten chosen projects, six were supported by NESOI and two of them made it to the top three (More information on the dedicated “Island Stories” section on NESOI website).

SYMBIOTIX (Socialized PV plant and energY coMmunity with puBlic-prIvate cOllaboraTion for buIlding and eXploiting) in Menorca, Spain: The goal of the technical assistance is to find regulatory ways to involve local citizens as investors and owners of the PV plant implemented, owned and operated by the consortium of local municipalities. While in Spain there is experience in cooperative of citizens, fully public or private ownership of generation plants, there is limited experience with public-private collaboration in renewable energy project.

SoFIA/ADEJE VERDE (Setup of the First Citizens' Energy Community in Canary Islands: Adeje) in Tenerife, Spain: The project consists in elaborating a feasibility study to establish energy communities around PV assets in the city of Adeje, where for collective self-consumption, community members will be given a monetary benefit

SAVE (Sustainable Actions for Viable Energy) in Crete, Greece: Two sports facilities owned and operated by the municipality will be involved as prosumers in the smart grid. The stored electricity, combined with electricity production from PV, will lead to annual compensation of their electricity consumption, resulting to zero-energy facilities, together with their energy performance upgrade.

The remaining projects included in the top ten list were the following:

Congratulations to all the winners! 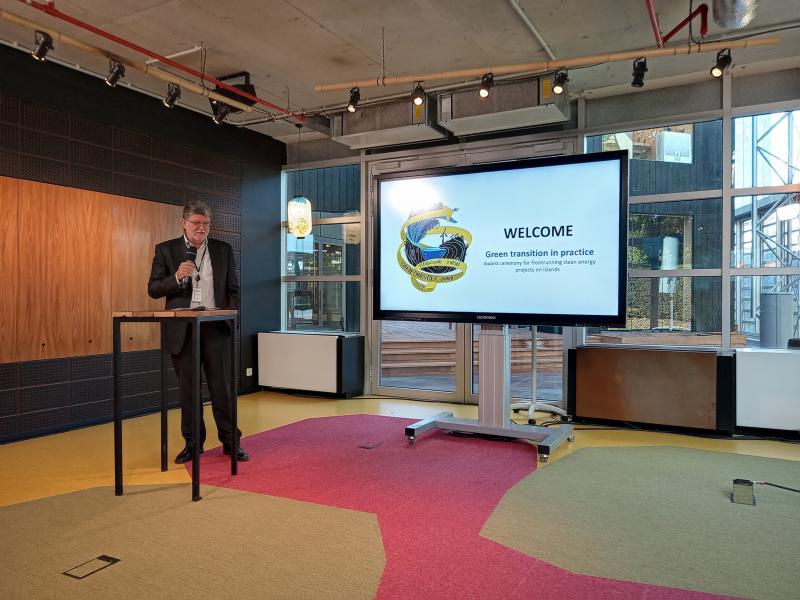 In the coming months,the team in NESOI will offer a series of short webinars involving experts in the field. This activity will be complementary to the e-learning modules that are expected to be also made available in the last months of 2022. The most mature projects will support the elaboration of the learning material by providing valuable input from their experiences to help less developped projects.